The Samuel Beckett Bridge is a cable-stayed bridge in Dublin that joins Sir John Rogerson’s Quay on the south side of the River Liffey to Guild Street and North Wall Quay in the Docklands area. The architect is Santiago Calatrava, a designer of a number of innovative bridges and buildings. This is the second bridge in the area designed by Calatrava, the first being the James Joyce Bridge, which is further upstream.

Constructed by a “Graham Hollandia Joint Venture”, the main span of the Samuel Beckett Bridge is supported by 31 cable stays from a doubly back-stayed single forward arc tubular tapered spar, with decking provided for four traffic and two pedestrian lanes. It is also capable of opening through an angle of 90 degrees allowing ships to pass through. This is achieved through a rotational mechanism housed in the base of the pylon. The shape of the spar and its cables is said to evoke an image of a harp lying on its edge. (The harp being the national symbol for Ireland from as early as the thirteenth century). The steel structure of the bridge was constructed in Rotterdam by Hollandia, a Dutch company also responsible for the steel fabrication of the London Eye. The steel span of the bridge was transferred from the Hollandia wharf in Krimpen aan den IJssel on 3 May 2009, with support from specialist transport company ALE Heavylift. The bridge, which cost €60 million, is named for Irish writer Samuel Beckett, was officially opened to pedestrians on 10 December 2009 by Dublin Lord Mayor, Emer Costello and to road traffic at 7 am the following day. 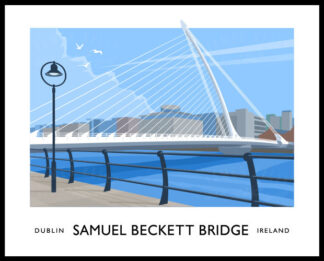 You're viewing: SAMUEL BECKETT BRIDGE (Dublin) travel poster
Select options
We use cookies to ensure that we give you the best experience on our website. If you continue to use this site we will assume that you are happy with it.
Cookie SettingsAccept All
Manage consent