The Brighton Palace Pier, commonly known as Brighton Pier or the Palace Pier is a Grade 2 listed pleasure pier in Brighton, England, located in the city centre opposite the Old Steine. Opening in 1899, it was the third pier to be constructed in Brighton after the Royal Suspension Chain Pier and the West Pier, but is now the only one still in operation. It is managed and operated by the Eclectic Bar Group.

The Palace Pier was intended as a replacement for the Chain Pier, which collapsed in 1896 during construction. It quickly became popular, and had become a frequently-visited theatre and entertainment venue by 1911. Aside from closures owing to war, it continued to hold regular entertainment up to the 1970s. The theatre was damaged in 1973 and following a buy-out was demolished in 1986, changing the pier’s character from seaside entertainment to an amusement park, with various fairground rides and roller coasters. 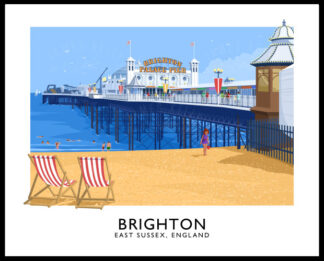 You're viewing: BRIGHTON PIER travel poster
Select options
We use cookies to ensure that we give you the best experience on our website. If you continue to use this site we will assume that you are happy with it.Ok