The Circuit of Ireland International Rally is an annual automobile rally, which was first held in 1931 making it the third oldest rally in the world. The most recent event was held in 2012 and after a years rest the 2014 event will rejoin the European Rally Championship for the first time since 1991. The event is also a round of the Northern Ireland Rally Championship and the Irish Tarmac Rally Championship.

The Circuit, as it is colloquially known, is organised by the Ulster Automobile Club and is traditionally held over the Easter holiday weekend. It normally starts and finishes in Northern Ireland, although over time the lengthy route of the event has typically included large segments in the Republic of Ireland as well. Most of the event’s special stages are laid out on paved public roads that are closed to other traffic. The rally originated in 1931 as the Ulster Motor Rally. It was run from multiple starting points, in a manner similar to the Monte Carlo Rally. After several years in this format, it transitioned into a 1089-mile circuit, essentially following the Irish coastline and starting and finishing in Bangor, County Down. 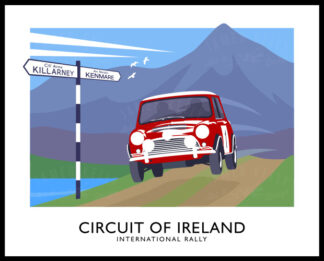