The Cliffs of Moher (Irish: Aillte an Mhothair) are located at the southwestern edge of the Burren region in County Clare, Ireland. They rise 120 metres (390 ft) above the Atlantic Ocean at Hag’s Head and reach their maximum height of 214 metres (702 ft) just north of O’Brien’s Tower, eight kilometres to the north. A round stone tower near the midpoint of the cliffs, the tower was built in 1835 by Sir Cornelius O’Brien. From the cliffs and from atop the tower, visitors can see the Aran Islands in Galway Bay, the Maumturks and Twelve Pins mountain ranges to the north in County Galway, and Loop Head to the south. The cliffs rank amongst the top-visited tourist sites in Ireland and receive almost one million visitors a year.

The cliffs take their name from an old fort called Moher, which once stood on Hag’s Head, the southernmost point of the cliffs. The writer Thomas Johnson Westropp referred to it in 1905 as Moher Uí Ruis or Moher Uí Ruidhin. The fort still stood in 1780 and is mentioned in an account from John Lloyd’s A Short Tour Of Clare (1780). It was demolished in 1808 to provide material for a new telegraph tower. The present tower near the site of the old Moher Uí Ruidhin was built as a lookout tower during the Napoleonic wars. 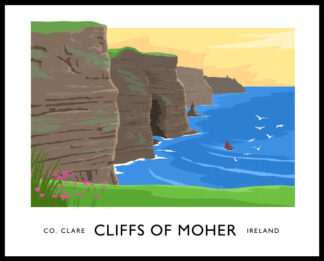