Henry George “Harry” Ferguson (4 November 1884 – 25 October 1960) was an engineer and inventor who is noted for his role in the development of the modern agricultural tractor, for being the first person in Britain or Ireland to build and fly his own aeroplane, and for developing the first four-wheel drive Formula One car, the Ferguson P99. Today his name lives on in the name of the Massey Ferguson company. 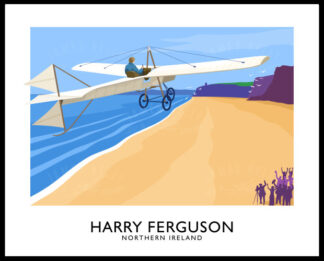 You're viewing: HARRY FERGUSON Airplane travel poster
Select options
We use cookies to ensure that we give you the best experience on our website. If you continue to use this site we will assume that you are happy with it.Ok