Vintage style art print of Galway Hooker sailing boats by The Long Walk in The Claddagh district of Galway city.

Claddagh is an area close to the centre of Galway city, where the River Corrib meets Galway Bay. It was formerly a fishing village, just outside the old city walls.

Galway is a city in the West of Ireland, in the province of Connacht. Galway lies on the River Corrib between Lough Corrib and Galway Bay.

Dún Gaillimhe (“Fort at the Mouth (bottom) of the Gaillimh”) was constructed in 1124, by the King of Connacht, Tairrdelbach Ua Conchobair (1088–1156). A settlement grew around it. During the Norman invasion of Connacht in the 1230s, Dún Gaillimhe was captured by Richard Mor de Burgh, who had led the invasion. As the de Burghs eventually became Gaelicised, the merchants of the town, the Tribes of Galway, pushed for greater control over the walled city.

This led to their gaining complete control over the city and to the granting of mayoral status by the English crown in December 1484. Galway endured difficult relations with its Irish neighbours. A notice over the west gate of the city, completed in 1562 by Mayor Thomas Óge Martyn, stated “From the Ferocious O’Flahertys may God protect us”. A by-law forbade the native Irish (as opposed to Galway’s Hiberno-Norman citizens) unrestricted access into Galway, saying “neither O’ nor Mac shall strutte nor swagger through the streets of Galway” without permission.

The Galway hooker (Irish: húicéir) is a traditional fishing boat used in Galway Bay off the west coast of Ireland. The hooker was developed for the strong seas there. It is identified by its sharp, clean entry, bluff bow, marked tumblehome and raked transom. Its sail plan consists of a single mast with a main sail and two foresails. Traditionally, the boat is black (being coated in pitch) and the sails are a dark red-brown. 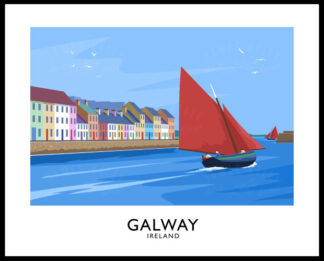