Harland & Wolff was formed in 1861 by Edward James Harland (1831–95) and Hamburg-born Gustav Wilhelm Wolff. In 1858 Harland, then general manager, bought the small shipyard on Queen’s Island from his employer Robert Hickson.

After buying Hickson’s shipyard, Harland made his assistant Wolff a partner in the company. Wolff was the nephew of Gustav Schwabe, Hamburg, who was heavily invested in the Bibby Line, and the first three ships that the newly incorporated shipyard built were for that line. Harland made a success of the business through several innovations, notably replacing the wooden upper decks with iron ones which increased the strength of the ships; and giving the hulls a flatter bottom and squarer cross section, which increased their capacity. Walter Henry Wilson became a partner of the company in 1874.

When Harland died in 1895, William James Pirrie became the chairman of the company until his death in 1924. Thomas Andrews also became the general manager and head of the draughting department in 1907. It was in this period that the company built Olympic and the two other ships in her class, Titanic and Britannic, between 1909 and 1914, commissioning Sir William Arrol & Co. to construct a massive twin gantry and slipway structure for the project. 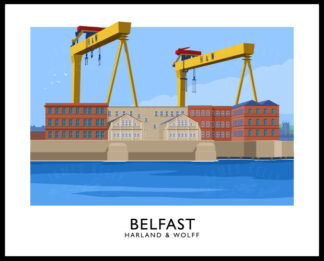 You're viewing: HARLAND & WOLFF travel poster
Select options
We use cookies to ensure that we give you the best experience on our website. If you continue to use this site we will assume that you are happy with it.Ok