Formerly a borough, Lisburn was granted city status in 2002 as part of Queen Elizabeth II’s Golden jubilee celebrations. It is the third-largest city in Northern Ireland. Lisburn is one of the constituent cities that make up the Dublin-Belfast corridor region which has a population of just under 3 million.

The town was originally known as Lisnagarvy (also spelt Lisnagarvey, Lisnegarvey, Lisnegarvy, Lisnegarvagh or Lisnagarvagh) after the townland in which it formed. This is derived from Irish Lios na gCearrbhach, meaning “ringfort of the gamesters/gamblers”.

Lisburn’s original site was located on what is now known as Hill Street, on a hill above the River Lagan. There was also a fort on the north side of what is now known as Castle Gardens. In 1611 James I granted Sir Fulke Conway, a Welshman of Norman descent, the lands of Killultagh in southwest County Antrim. During the 1620s the streets of Lisburn were laid out just as they are today: Market Square, Bridge Street, Castle Street and Bow Street. Conway brought over many English and Welsh settlers during the Ulster Plantation; he also had a manor house built on what is now Castle Gardens, and in 1623, a church on the site of the current cathedral. In 1628, Sir Edward Conway, brother to the now deceased Sir Fulke, obtained a charter from King Charles I granting the right to hold a weekly market. This is still held in the town every Tuesday. The Manor House was destroyed in the accidental fire of 1707 and was never rebuilt; the city’s Latin motto, Ex igne resurgam (“Out of the fire I shall arise”), is a reference to this incident.

Lisburn is also known as the birthplace of Ireland’s linen industry, which was established in 1698 by Louis Crommelin and other Huguenots. An exhibition about the Irish linen industry is now housed in the Irish Linen Centre, which can be found in the old Market House in Market Square. 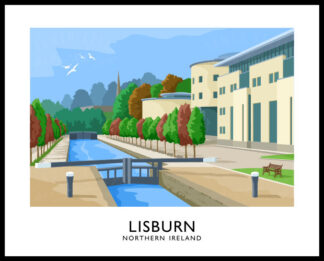