Newgrange is a prehistoric monument in County Meath, Ireland, located eight kilometers west of Drogheda on the north side of the River Boyne. It was built during the Neolithic period around 3200 BC, making it older than Stonehenge and the Egyptian pyramids. The site consists of a large circular mound with a stone passageway and interior chambers. The mound has a retaining wall at the front and is ringed by engraved kerbstones. There is no agreement about what the site was used for, but it has been speculated that it had religious significance – it is aligned with the rising sun and its light floods the chamber on the winter solstice.

After its initial use, Newgrange was sealed for several millennia, although it remained storied in Irish mythology and folklore. Antiquarians first began its study in the 17th century, and archaeological excavations took place at the site in the years that followed. Archaeologist Michael J. O’Kelly led the most extensive of these and also reconstructed the frontage of the site in the 1970s, a reconstruction that is controversial and disputed. Newgrange today is a popular tourist site and, according to the archaeologist Colin Renfrew, is “unhesitatingly regarded by the prehistorian as the great national monument of Ireland” and as one of the most important megalithic structures in Europe. 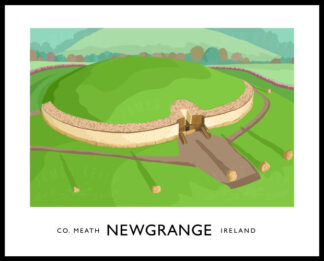 You're viewing: NEWGRANGE travel poster
Select options
We use cookies to ensure that we give you the best experience on our website. If you continue to use this site we will assume that you are happy with it.
Cookie SettingsAccept All
Manage consent