Vintage style travel poster art print of ‘The Cut’ in Banbridge, County Down.

Banbridge is a town in County Down, Northern Ireland. It lies on the River Bann and the A1 road and is named after a bridge built over the River Bann in 1712. The town began as a coaching stop on the road from Belfast to Dublin and thrived from Irish linen manufacturing. The town’s main street is very unusual, rising to a steep hill before levelling out. In 1834 an underpass was built as horses with heavy loads would faint before reaching the top of the hill. It was built by William Dargan and is officially named ‘Downshire Bridge’, though it is often called “The Cut”. 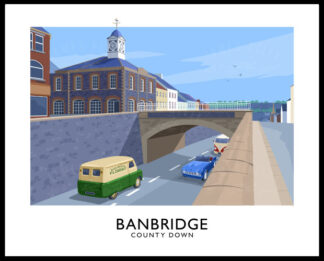 You're viewing: BANBRIDGE
Select options
We use cookies only to ensure that we give you the best experience on our website. No data is shared with anyone else. If you continue to use this site we will assume that you are happy with it. Ok, got it.