Spectacular rural view of the mountains of Connemara in the West of Ireland.

Connemara lies in the territory of Iar Connacht, “West Connacht”, which is the portion of County Galway west of Lough Corrib. It was traditionally divided into North Connemara and South Connemara. The mountains of the Twelve Bens and the Owenglin River, which flows into the sea at An Clochán/Clifden, marked the boundary between the two parts. The region is bounded on the west, south and north by the Atlantic Ocean. Connemara’s land boundary with the rest of County Galway is marked by the Invermore River (which flows into the north of Kilkieran Bay), Loch Oorid (which lies a few miles west of Maam Cross) and the western spine of the Maumturks mountains. In the north of the mountains, the boundary meets the sea at Killary, a few miles west of Leenaun. 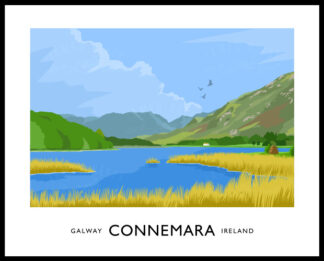 You're viewing: CONNEMARA travel poster
Select options
We use cookies to ensure that we give you the best experience on our website. If you continue to use this site we will assume that you are happy with it.Ok