A vintage style art print of the Church hall and Corporal Jone’s van from the TV sitcom Dad’s Army.

Walmington-on-Sea is a fictional seaside resort that is the setting of Dad’s Army, including the BBC Television sitcom, the BBC Radio 4 series and two feature films.

In World War II, with a German invasion looming, the defence of Walmington-on-Sea rests in the hands of the local bank manager and a motley collection of volunteers in the Home Guard unit. Despite being woefully ill-equipped, the rag-tag crew is ready to take on invading troops from across the Channel. 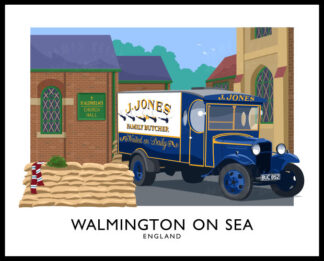 You're viewing: WALMINGTON ON SEA (Dad’s Army) travel poster
Select options
We use cookies to ensure that we give you the best experience on our website. If you continue to use this site we will assume that you are happy with it.Ok