Vintage style art print of The Nags Head pub, the Nelson Mandella tower block and the Trotter’s van from Only Fools and Horses, a TV sitcom set in the district of Perckham in London, England.

Only Fools and Horses is a British sitcom created and written by John Sullivan. Seven series were originally broadcast on BBC One in the United Kingdom from 1981 to 1991, with sixteen sporadic Christmas specials aired until the end of the show in 2003. Episodes are regularly repeated on UKTV comedy channel Gold and occasionally repeated on Yesterday and BBC One.

Set in Peckham in south-east London, it stars David Jason as ambitious market trader Derek “Del Boy” Trotter, Nicholas Lyndhurst as his younger brother Rodney Trotter, and Lennard Pearce as their elderly Grandad. After Pearce’s death in 1984, his character was replaced by Del and Rodney’s Uncle Albert (Buster Merryfield) who first appeared in February 1985. Backed by a strong supporting cast, the series follows the Trotters’ highs and lows in life, in particular their attempts to get rich. 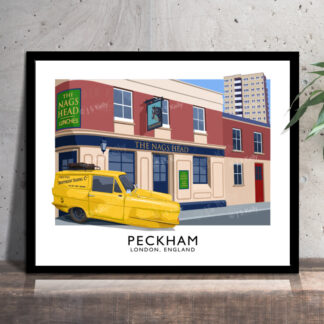 You're viewing: PECKHAM (Only Fools and Horses) travel poster
Select options
We use cookies to ensure that we give you the best experience on our website. If you continue to use this site we will assume that you are happy with it.
Cookie SettingsAccept All
Manage consent