Kilkenny is a medieval town in southeast Ireland. Its grand Kilkenny Castle was built in 1195 by Norman occupiers. The town has deep religious roots and many well-preserved churches and monasteries, including imposing St. Canice’s Cathedral and the Black Abbey Dominican priory, both from the 13th century. It’s also a crafts hub, with shops along its winding lanes selling pottery, paintings and jewellery.

In 2009 the City of Kilkenny celebrated its 400th year since the granting of city status in 1609.

Kilkenny began with an early sixth century ecclesiastical foundation within the kingdom of Ossory. Following Norman invasion of Ireland, Kilkenny Castle and a series of walls were built to protect the burghers of what became a Norman merchant town. William Marshall, Lord of Leinster, gave Kilkenny a charter as a town in 1207. By the late thirteenth century Kilkenny was under Norman-Irish control. The Statutes of Kilkenny passed at Kilkenny in 1367, aimed to curb the decline of the Hiberno-Norman Lordship of Ireland. In 1609 King James I of England granted Kilkenny a Royal Charter giving it the status of a city. Following the Rebellion of 1641, the Irish Catholic Confederation, also known as the “Confederation of Kilkenny”, was based in Kilkenny and lasted until the Cromwellian conquest of Ireland in 1649.

Kilkenny was a brewing centre from the late seventeenth century, and still houses a number of breweries. The Heritage Council offices are at Church Lane. The seat of the Roman Catholic Bishop of Ossory is at St Mary’s Cathedral and the Church of Ireland Bishop of Cashel and Ossory is at St Canice’s Cathedral. 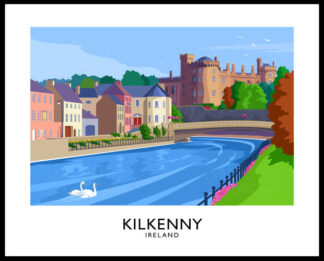