Magilligan is a peninsula that lies in the northwest of County Londonderry, Northern Ireland, at the entrance to Lough Foyle, within Causeway Coast and Glens district.

Martello Tower, to the north of Magilligan Point near the lough, commenced construction in 1812, rather late in the British sequence, as the original plan for a fort at Magilligan point was impractical due to soft ground. A genuinely round tower mounting two 24 pounder guns, it has been restored but is normally locked. It was built at the same time as the more unusual double-gunned tower across the lough at Greencastle. It was not completed until 1817, two years after Napoleon, against whose invasion it was built to protect, had been exiled to St. Helena. The garrison stationed here never fired a shot at any enemy. During World War II the top of the tower was fitted out with a pillbox. Since the tower was built, deposits of sand have extended the peninsular by several hundred metres and the tower is now located a considerable distance from the sea. 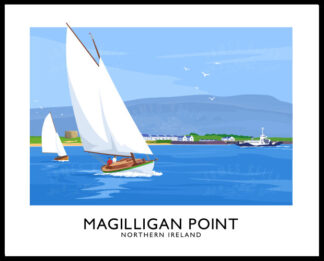 You're viewing: MAGILLIGAN POINT
Select options
We use cookies only to ensure that we give you the best experience on our website. No data is shared with anyone else. If you continue to use this site we will assume that you are happy with it. Ok, got it.