Springhill is a 17th-century plantation house in the townland of Ballindrum near Moneymore, County Londonderry in Northern Ireland. It has been the property of the National Trust since 1957 and, in addition to the house, gardens and park, there is a costume collection and a purported ghost. It is open from March to June, and September on weekends, and is open to the public seven days a week during July and August.

This 17th-century unfortified house was built about 1680 and was originally surrounded by a defensive bawn. Around 1765 two single-storey wings were added and the entrance front was modified to its present arrangement of seven windows across its width. 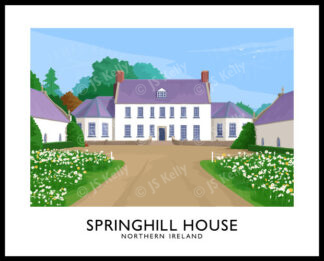