A vintage style art print of the picturesque row of thatched cottages in Adare, County Limerick.

Adare is a village in County Limerick, Ireland, located south-west of the city of Limerick. Renowned as one of Ireland’s prettiest towns, Adare is designated as a heritage town by the Irish government.

The River Maigue is tidal as far as Adare, with the settlement forming around the eastern bank of the Maigue overlooking the fording point from which the village gets its name. An annalistic reference is made in the medieval Annals of Inisfallen at AI982.4 “The Tree of Mag Adar was broken by Leth Cuinn”. Owing to the strategic importance of the river crossing the Desmond castle was built overlooking the site near Ardshanbally (derived from Ard an tSeanbhaile – ‘high ground of the old town’), and was first mentioned in 1226. Historically a market town, in the Middle Ages, Adare boasted three monasteries. Owing to the influence of the Earls of Dunraven, who built the Adare Manor (now a luxury resort hotel) a strict plan was laid out for the town. 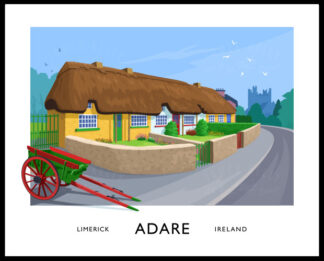