Armagh Observatory is a modern astronomical research institute with a rich heritage, based in Armagh, Northern Ireland. Around 25 astronomers are based there, studying stellar astrophysics, the Sun, Solar System astronomy and Earth’s climate. The Observatory is located close to the centre of the city of Armagh, adjacent to the Armagh Planetarium in approximately 14 acres (57,000 m2) of landscaped grounds known as the Armagh Astropark, and was founded in 1789 by Richard Robinson, Archbishop of Armagh. Ernst Julius Öpik (grandfather of Lembit Öpik MP) was based here for over 30 years and among his many contributions to astrophysics he wrote of the dangers of an asteroid impacting on the Earth. There are scale models of the Solar System and the Universe, two sundials and historic telescopes, as well as telescope domes and other outdoor exhibits. The Human Orrery, launched in 2004, is located close to the main Observatory building. The Observatory’s specialist library and archives, and collections of scientific instruments and artefacts associated with the development of modern astronomy, represent one of the leading collections of its kind in the British Isles. 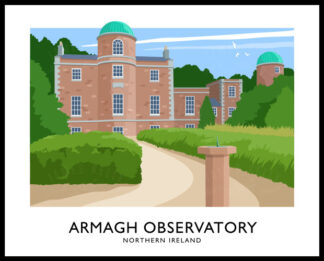 You're viewing: ARMAGH OBSERVATORY travel poster
Select options
We use cookies to ensure that we give you the best experience on our website. If you continue to use this site we will assume that you are happy with it.Ok