Armagh Planetarium was established by the seventh director of Armagh Observatory, Dr. Eric Mervyn Lindsay, who, after twenty-five years of effort, secured funding from local councils and the Ministry of Commerce of Northern Ireland in 1965. In the same year Patrick Moore was appointed as Director of the Planetarium to oversee its construction. The planetarium cost £120,000 to build (included in this was £12,000 for the planetarium’s first projector) and was officially opened on 1 May 1968, although it had been open to the public for some months before that. Since then it has undergone many alterations: the main building was extended in 1974 to incorporate the Lindsay Hall of Astronomy, and a dome was created to house a 16″ (400 mm) reflecting telescope for public use, currently the largest public telescope in Ireland. In addition, in 1994 a new exhibition hall, the Eartharium, was added due to increased interest in Earth Science. The Armagh Astropark, which opened in 1994, is a scale model of the solar system and the Universe contained in the grounds of the Armagh Observatory, with scale-sized stainless steel models of the Sun and planets. 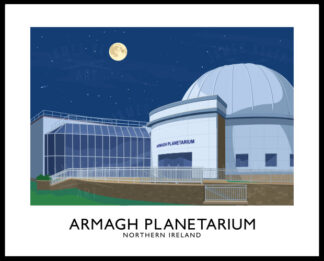