The Space Shuttle was a partially reusable low Earth orbital spacecraft system operated from 1981 to 2011 by the National Aeronautics and Space Administration (NASA) as part of the Space Shuttle program.

The John F. Kennedy Space Center (KSC, originally known as the NASA Launch Operations Center), located on Merritt Island, Cape Canaveral, Florida, is one of the National Aeronautics and Space Administration’s ten field centers. Since December 1968, KSC has been NASA’s primary launch center of human spaceflight. Launch operations for the Apollo, Skylab and Space Shuttle programs were carried out from Kennedy Space Center Launch Complex 39 and managed by KSC. Located on the east coast of Florida, KSC is adjacent to Cape Canaveral Air Force Station (CCAFS). 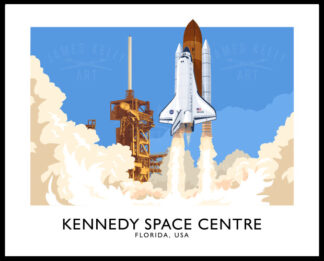 You're viewing: SPACE SHUTTLE travel poster
Select options
We use cookies to ensure that we give you the best experience on our website. If you continue to use this site we will assume that you are happy with it.Ok