Vintage style travel poster art print of the 18th Century Custom House on the banks of the River Liffey.

The building of a new Custom House for Dublin was the idea of John Beresford, who became first commissioner of revenue for Ireland in 1780. In 1781 he appointed James Gandon as architect, after Thomas Cooley, the original architect on the project, had died. This was Gandon’s first large scale commission. The new Custom House was unpopular with the Dublin Corporation and some city merchants who complained that it moved the axis of the city, would leave little room for shipping, and it was being built on what at the time was a swamp. Purchase of land was delayed and proved exorbitant and the laying of foundations was disrupted by the High Sheriff and members of the Dublin Corporation with a mob of several thousand. However, Beresford was determined to complete the project and ignored the protests.

Construction started in 1781, and for his assistants Gandon chose Irish artists such as Meath stone-cutter Henry Darley, mason John Semple and carpenter Hugh Henry. Every available mason in Dublin was engaged in the work. When it was completed and opened for business on 7 November 1791, it had cost £200,000 to build – a considerable sum at the time. The four facades of the building are decorated with coats-of-arms and ornamental sculptures (by Edward Smyth) representing Ireland’s rivers. Another artist, Henry Banks, was responsible for the statue on the dome and other statues. 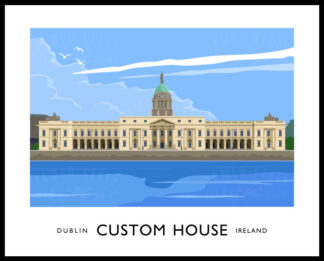