The Irish Grand Prix also known Irish International Grand Prix was an open-wheel racing car motor race which was held three times on a 4.25 mile circuit laid out in the grounds of Phoenix Park in Dublin.

The Grand Prix was actually two separate handicap races held under a single banner of the Irish International Grand Prix. Fridays race was for cars up to 1500 cc whose drivers competed for the Saorstát Cup, while on Saturday the drivers in the more powerful cars (over 1500 cc) raced for the Éireann Cup. The overall winner of the Irish Grand Prix was decided by the driver who completed the 300 mile race distance from either the Saorstát Cup or Éireann Cup races in the fastest time over the two days.

The first year was 1929 when Boris Ivanowski, a former Imperial Officer in the Russian army was dominant, racing and winning both the Saorstát Cup and Éireann Cup races driving in an Alfa Romeo, to claim the inaugural Irish Grand Prix. In the Saorstát Cup race his victory margin was over a minute ahead of Sammy Davis (Lea-Francis), finishing in a time of 3h:41m:30s. In the Éireann Cup race it was a much closer battle between Ivanowski’s Alfa Romeo and England’s Glen Kidston (Bentley) with the Russian completing the 300 mile race distance in a time of 3h:40m:54s, only 14 seconds ahead of Kidston in second place, followed by Henry Birkin (Bentley), third. 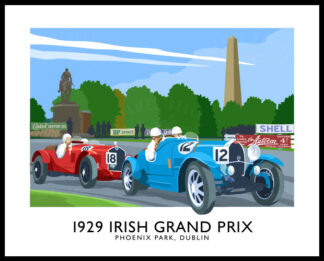