Vintage style art print of Portadown and the River Bann.

Portadown is a town in County Armagh, Northern Ireland. The town sits on the River Bann in the north of the county, about 24 mi (39 km) southwest of Belfast. It is in the Armagh City, Banbridge and Craigavon Borough Council area and had a population of about 22,000 at the 2011 Census. For some purposes, Portadown is treated as part of the “Craigavon Urban Area”, alongside Craigavon and Lurgan.

Although Portadown can trace its origins to the early 17th century Plantation of Ulster, it was not until the Victorian era and the arrival of the railway that it became a major town. It earned the nickname “hub of the North” due to it being a major railway junction; where the Great Northern Railway’s line diverged for Belfast, Dublin, Armagh and Derry. In the 19th and 20th centuries Portadown was also a major centre for the production of textiles (mainly linen). 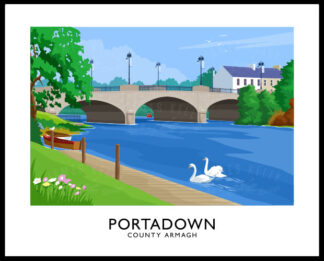